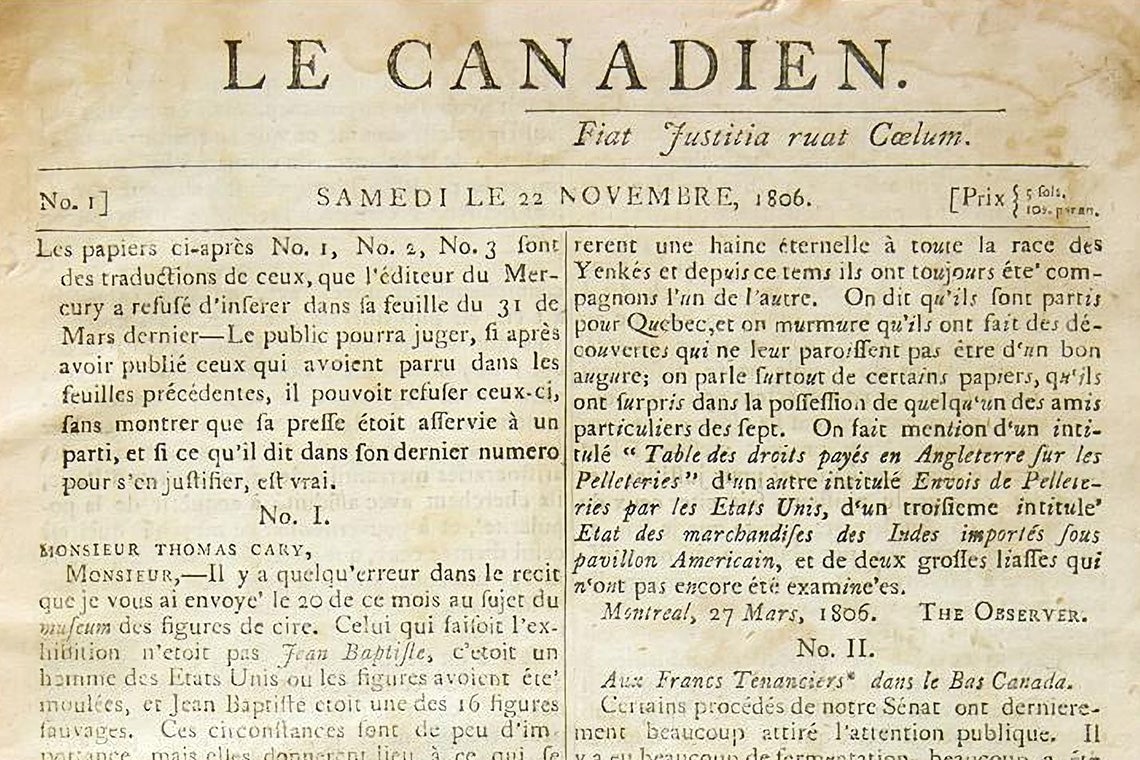 University of Toronto researchers are providing valuable insight into Canada’s history by creating a free, accessible database of the country’s earliest newspapers.

Directed by Sébastien DrouinAssociate Professor in the Department of Language Studies at the University of Toronto Scarborough, the bilingual “Early Modern Canadian Newspapers Online” project is a collection of newspapers from the second half of the 18th century – from 1752 to 1810 – printed in Nova Scotia , New Brunswick, Prince Edward Island, Quebec and Ontario.

“There are libraries at other universities that have started digitizing Canadian newspapers, but there are no other projects right now dedicated to early modern Canadian newspapers,” says Drouin, an expert in underground literature. and in modern journalism.

“We are very happy to provide access to documents that are almost impossible to find at this time.”

The project is one of five U of T Scarborough projects that have recently been supported by the Jackman Scholars-in-Residence (SiR) program. Powered by the Jackman Humanities Institute, the tri-campus initiative offers undergraduate students a platform to conduct research with a professor working in the humanities or social sciences for an intensive four-week period.

It took a multidisciplinary team of students in modern and Canadian history, book history and computer science to complete the project.

The U of T Scarborough Library’s Digital Scholarship Unit (DSU), an initiative that assists scholars with digital collections, digital preservation and scholarly communications, has been a key partner in helping the SiR team to connect with institutions across the country that have access to early modern newspapers – which are often stored on microfilm.

The library has so far supported the discovery and digitization of 24 journals (so far) through partnerships with the Canadian Research Knowledge Network and the University of New Brunswick Libraries. In fact, the U of T Scarborough Library now owns a 19enewspaper of the last century called The Canadian.

Five U of T students worked to populate the database with the microfilms to create searchable biobibliographic profiles of the journals, including its printers, early reporters, and publication context.

There are 30 copies of various newspapers in the database, the majority being complete runs published in 1752 – the year the Halifax Gazette, Canada’s first newspaper, was printed in Nova Scotia. Another discovery was the 18th century subscriber lists in Quebec Gazette.

“Newspapers were less about free speech and more a colonial enterprise,” says Drouin. “It slowly evolved into a vehicle for expressing your opinion.”

University of Toronto Scarborough students Sapphire Davis and Tanya Ng Cheong were work-study students from the digital stock exchange unit who participated in the SiR program.

Ng Cheong, a third-year student of English, Journalism, and Creative Writing, prepared materials to be processed for categorization. This included sorting and examining photomicrographs for damage and the tedious process of documenting page numbers, dates, titles and places of publication for each article.

International student from Mauritius, Ng Cheong says the project was a unique way to learn about Canadian history.

“A really interesting part for me was learning the history of Canada,” says Ng Cheong. “I don’t learn it in class. I learn from newspapers that people read centuries ago in Canada. It tells me so much more than what I could have read on a Wikipedia page, for example.

For the SiR project, Davis and Ng Cheong delved into the content of the diaries themselves, which included transcribing articles, finding mentions of notable people in history, and finding additional context for the database. data.

“We saw advertisements for slave auctions, search warrant notices, and really paid attention to the language used,” says Davis, a fifth-year French and linguistics student. “I think our first step in the decolonization part of this project is that we can prove what happened in Canadian history and do the work to dismantle it.”

The team will continue to develop the database, with the hope of launching it next year. Meanwhile, the U of T Scarborough Library will work with student staff through its Emerging Professionals program to provide U of T students with additional opportunities to gain experience in software programming and processing work. used in the SiR project.