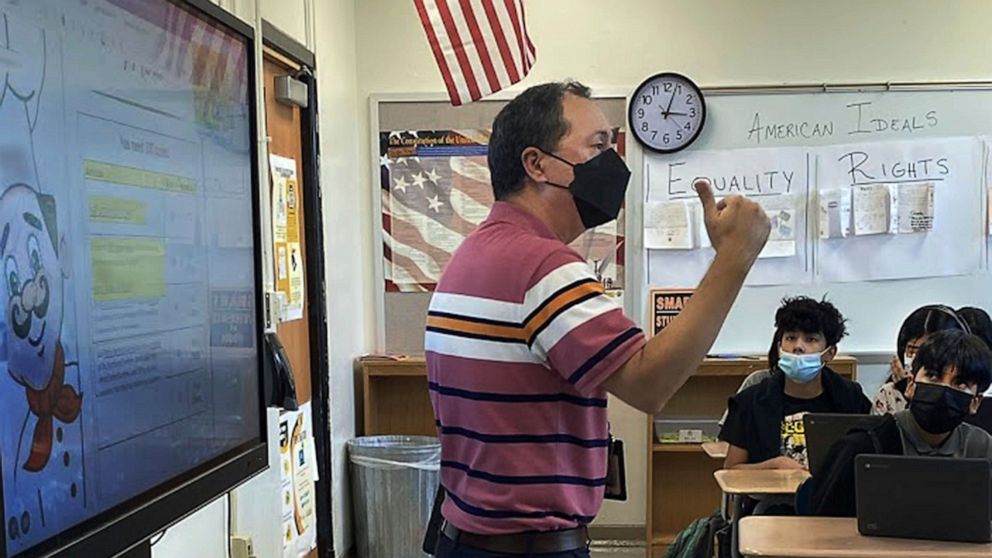 In the United States, teachers face classrooms where up to half of students are absent because they were exposed to COVID-19 or their families kept them home for fear of the outbreak. of the coronavirus.

From New York to Seattle, widespread absences have only added to the difficulty of keeping students on track in another pandemic-disrupted school year.

“It really hurts learning. If you have three kids in your class one day and you’re supposed to be 12, you have to relearn everything two weeks later when those kids come back,” said Tabatha Rosproy, a teacher at Olathe. , Kansas, and 2020 National Teacher of the Year.

Some of the nation’s largest school systems are reporting absenteeism rates of around 20% or slightly higher, with some individual schools reporting much higher percentages of missing students.

Schools in Clark County, Nevada, which includes Las Vegas, typically have 90% attendance, but that figure has dropped to 83%. In Seattle, attendance has averaged 81% since returning from winter vacation. Los Angeles Public Schools marked about 30% of the district’s more than 600,000 students absent Tuesday, the first day back after the hiatus.

In New York, about 76% of the city’s roughly 1 million public school students were in class Wednesday, with some schools reporting that more than half of their students were absent.

Adnan Bhuiyan, 17, has at times been one of seven or eight students in classes that normally number 30 at Bronx Latin School. He spent much of the first week back from vacation in free time, wondering why he was there.

Students who have received home COVID-19 tests have taken them and tested positive at school, he said, and many are nervous about being exposed.

“Part of me was like, why are we sitting here doing nothing all day. Why can’t we just stay home” and learn remotely, he said. “The other part of me knows that the mayor wants to keep the school open for certain reasons, and I can understand that. But the more we went through it, the more I kept thinking at this point that it was a waste of time for everyone because we don’t learn anything.

As the highly contagious omicron variant causes a shortage of teachers, some schools have temporarily switched to remote learning. Of the roughly 100,000 public schools nationwide, nearly 4,200 were closed to in-person learning midweek, according to data-tracking site Burbio.

President Joe Biden has stressed the importance of keeping schools open for in-person learning. The White House on Wednesday announced a monthly supply of 5 million rapid tests and 5 million PCR lab tests that schools can use for testing programs to remain intended to reduce disruption.

Absences leave teachers wondering whether to move forward with lessons and how to help students left behind.

Daniel Santos, a history teacher, said about half of his students were absent when classes resumed after the winter break. Lately, about a third have been absent from his classes at Navarro Middle School in Houston, where more than 90% of students are Hispanic. Aware of the mandatory standardized tests coming in the spring, he has created video lessons that missing students can watch again at home.

“It’s like an avalanche. It doesn’t stop. Some students come back. Then a new group of students are missing,” he said.

District attendance in Houston was around 90% this week.

Alejandro Diasgranados, a second-grade teacher in Washington, DC, said his class has gone from perfect attendance most days to half-empty some days since winter break. The absences are adding pressure to help students who were already behind due to the pandemic, he said.

The challenge then falls to teachers “to almost individually prescribe an academic learning plan for each student,” he said.

Student absences have been cited by some teachers’ unions to call for more flexibility to switch to remote learning when conditions warrant.

Kathryn Medendorp, an elementary teacher at San Antonio’s Northside Independent School District, said the social and emotional benefits of staying in school outweigh some of the academic difficulties caused by missing students and staff. But she favors a clear metric that would signal a return to distance learning.

Her school was missing 21 third-grade students in the mask-optional neighborhood on a single day this week, the equivalent of a class, she said. At the same time, only one student was absent from her own second-grade class.

A fence metric “would at least help me feel better about having some kind of control over this,” said Medendorp, who is secretary of the Northside American Federation of Teachers. “Our numbers have already shown that some classes are going very well, that’s not a problem. Other classes, it’s spreading like wildfire, so it’s a problem there, and we have to stop this spread.