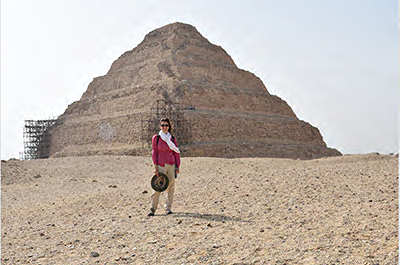 The enduring power of Ramses the Great

Ramses the Great has been dead for 3,235 years, but this mighty pharaoh still retains a grip on the public imagination. Watch the long lines at the de Young Museum in San Francisco, which now hosts the exhibition”Ramses the Great and the gold of the pharaohs”, on view until February 12.

Crowds at the de Young gaze at the sarcophagi, wonder about the mummified cats and lion cubs, and marvel at the colossal stone head of Ramses the Great at the start of the exhibit.

Those interested in ancient Egypt and the pharaohs and wanting to get a vivid cultural, religious and political context for the ancient artifacts on display at the de Young should Book a seat for “The age of gold, the age of empire,” Speech by Elaine Sullivan, Egyptologist and UCSC History Professor, Sunday, October 2 at the Museum of Art and History in Downtown Santa Cruz.

The conference is organized by the Institute of Humanities at UCSC and co-sponsored by the Santa Cruz Museum of Art and History (MAH) and the UC Santa Cruz Special Collections and Archives.

Although the free conference is open to the public, seating is limited, so reservations are strongly encouraged.

Sullivan will delve into the lives and legacies of other major historical figures that museum visitors will encounter during Young’s exhibit – including the powerful women of his reign such as his “great royal wife” Nefertari and mother of King Tuya.

Those who see Sullivan’s speech will also learn about the master craftsman Sennedjem who decorated the royal tombs of Ramses, and the imposing pharaoh’s father Sety, whose magnificent painted wooden coffin is in the show.

“Era Of Gold, Era Of Empire” is an add-on to Young’s show. Sullivan considers the show worth seeing due to its exhibits of New Kingdom statuary and royal jewelry from other periods of Egyptian history, although she wished the curation had delved more deeply into the historical context of the exhibits.

The exhibition shows relics from the tomb of Ramses II, as well as an assortment of grave goods from Dashur and Tanis, two incidental towns along the Nile.

Sullivan calls “Ramesses the Great and the Gold of the Pharaohs” a rare opportunity to see the artifacts, which are on loan from the Egyptian government.

“Here on the west coast, we don’t have a lot of places where we have access to these kinds of masterpieces of Egyptian art,” Sullivan said. “Usually you have to go to New York, Europe or Cairo.”

Still famous after all these years

It is not surprising that the exhibition shook people. In terms of public interest and name recognition, Ramesses the Great continues to stand apart from most of the estimated 170 pharaohs who ruled Egypt during the Pharaonic period, which lasted 2,700 years, about 10 times longer than the history of the United States as a country.

When it comes to 21st-century notoriety, Ramesses the Great — who reigned from 1279 to 1213 BCE — has only one serious rival, King Tutankhamun, Sullivan said.

Ramses II made his mark with numerous temples, obelisks and colossal statues of himself. He also expanded Egypt’s empire and increased its power with his wars against the Hittites, including the epic Battle of Kadesh, considered the greatest chariot battle of all time.

To become a household name, King Tut has a serious advantage as his tomb was found intact in 1922, at a time when most other known graves had been looted and in some cases completely emptied.

“But Ramses the Great had two big things going for him,” Sullivan said. “One is his long reign. He ruled for over 60 years as part of the 19th Dynasty, wwhich physically gave him so much time to build and brand his name across the country, and he was an incredibly prolific builder.

The second major factor is the pharaoh’s astonishing penchant for self-promotion and mythology, Sullivan said.

“Ramses not only built monuments; he also had his name inscribed on the monuments of his ancestors,” Sullivan said. “And when he did that, it was his way of saying, ‘I am the new king and your rightful successor. He kind of inserted himself into the narrative in all these different spaces, even if it was something he hadn’t bothered to build himself.

When Egyptologists started to figure out how to translate hieroglyphics, they started seeing Ramses’ name over and over again, Sullivan said. Ramses was also a larger than life character, as he was given a combination of high roles that tended to be divided in other societies. He was a political leader but also the highest military general, as well as the high priest of Egypt.

“His work is both religious and political; it is for the gods and elites of ancient Egyptian society,” Sullivan said. “It is also aimed at the majority of the inhabitants of ancient Egypt, who could not read. These large images on monumental buildings were a form of communication in an illiterate world. There are scenes of him defending Egypt from chaos, from foreigners.

Try to understand the point of view of the elders

Museum buffs will notice the amount of lavish decoration that has gone into the monuments and temples of the pharaohs as well as their tombs. Sullivan will explore the reasons for this attention to detail. “Truly, the artwork of ancient Egypt is both outward looking – sending a political message – but it also has a political and religious message. Ramses the Great was considered a semi-divine king and a son of the gods.

Visitors may find it a bit harder to understand why other examples of art that were never meant to be seen by anyone had such a painstaking amount of detail.

Why go through so much trouble when the graves of the dead were closed and sealed after every mighty king passed away?

One of the reasons has to do with the fact that the objects were thought to carry a spiritual power that would carry on through the ages. “These items were sort of spells that protected the king, allowing him to regenerate,” Sullivan said. Funerary inscriptions protected the eternal spirit of the king or “ka”.

“These were spells that protected his body, that allowed him to reach and become a god in the afterlife, and to be reborn every day with the sun,” Sullivan explained.

Gossip and complaint: the “post-its” of ancient Egyptian craftsmen

A hall in the de Young exhibit will offer museum visitors a rare look into the lives, perspectives, gossip and complaints of the craftsmen who decorated the tomb of Ramses the Great. Highly educated and meticulously trained, but not drawn from the elite classes of politicians or royal administration, these craftsmen were stonemasons, painters, carpenters and scribes.

Sullivan said she wanted the show to delve into the lives of these artisans, who used pieces of limestone flakes to write informal notes to communicate with others. “We would think of it like old post-it notes,” Sullivan said. “They would just write ‘laundry dropped off at cleaners, so many items’ or ‘that’s what I paid you to make me this piece of furniture’.”

When the craftsmen were done with these notes, they were finally tossed into a dried-up well that served as a trash can – and they remained there for millennia.

“When archaeologists found these notes, all of a sudden we had all this information about what these people did and who they were,” Sullivan said. “Archaeologists were able to construct family trees based on the information.”

Some notes are hilarious even now.

“They’re complaining about everyone living in the village, and there’s a guy who’s sleeping with everyone’s wife, and they’re all mad at him, and there are notes showing people quitting work and pretend to be sick,” Sullivan said. . “So we see all these types of human beings that we want to know about the ancient world.”

A three-dimensional look at the ancient world

During his speech, Sullivan will briefly take MAH patrons to a model of Ramses’ Abu Simbel Temple. In his own research, Sullivan uses 3D computer imagery to create complex models of ancient sites, such as the temples at Karnak and the cemetery at Saqqara, both of which underwent major construction during Ramses’ reign. She uses 3D technologies to visualize archaeological sites through space and time, giving us a new perspective of these ancient places.

She received the 2020 Roy Rosenzweig Award for Innovation in Digital History from the American Historical Association (AHA) for his project Constructing the Sacred: Visibility and Ritual Landscape at the Egyptian Necropolis of Saqqara.

This publication is among the first to push the boundaries to include interactive 3D models that can be navigated in both space and time. It was published earlier this year by Stanford University Press as part of their new series of monographs and scholarly publications.

“These technologies help us draw conclusions about what these places look like, the same way I imagine people make huge inferences by looking at a fossil,” Sullivan said. “I feel like 3D modeling is the closest thing I can imagine to the ability to time travel because it allows me to reimagine and consider spaces that no longer exist.”

Register here to reserve your place for Sullivan’s free talk. Visit the deYoung Museum website for book tickets for the Ramses the Great exhibit in San Francisco.