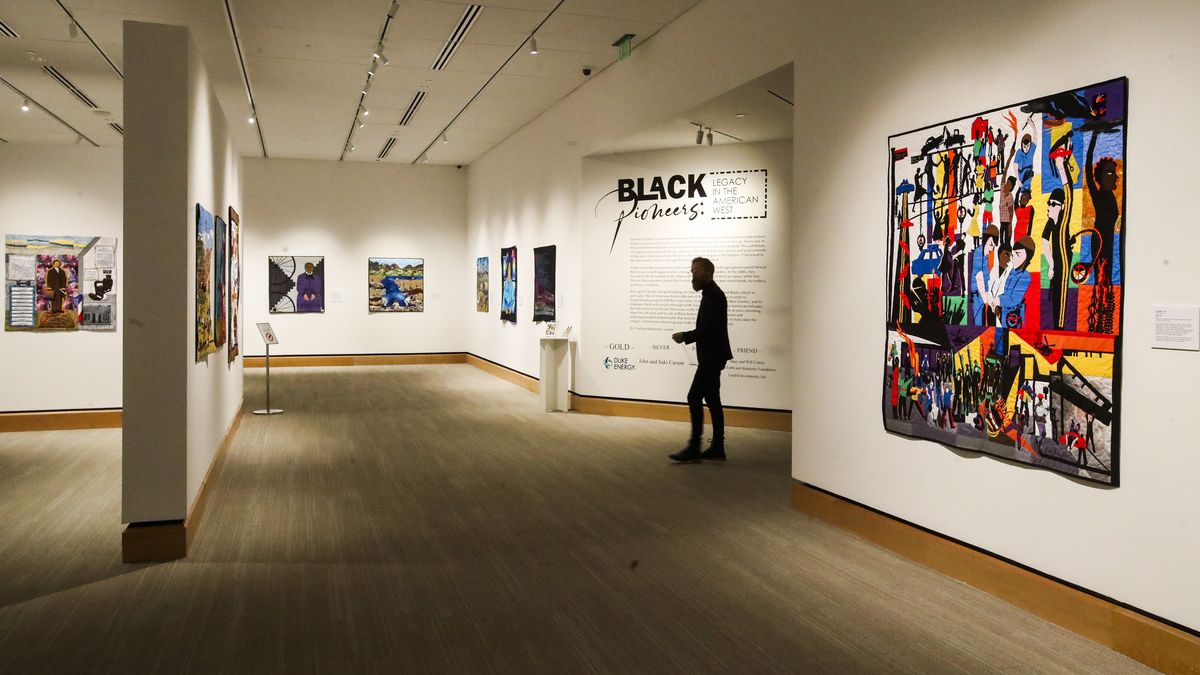 The history of black pioneers told through quilts at the James Museum in St. Petersburg

ST. PETERSBURG – Discover the largely untold stories of the people who have made up the fabric of this country’s history – literally, through textiles – at the James Museum of Western and Wildlife Art.

“Black Pioneers: Legacy in the American West” is the first of its kind, exploring black history in the West through a timeline of picture quilts. It dispels myths and illuminates facts about black professions, religions and achievements.

The quilts were created by the Women of Color Quilters Network especially for this exhibit hosted by the James Museum.

Dr. Carolyn Mazloomi, curator, historian and artist, is the founder of the Women of Color Quilters Network. Mazloomi researched the involvement of African Americans in the West extensively and did not find much written material. She came up with a timeline and list of notable characters and let the network pick which one they wanted to portray.

Mazloomi thinks quilts are an easy way to tell stories in a visual language. She also noted that the Africans who were brought to the United States already had sewing skills that translated easily into quilting. She said storytelling quilts were a way to tell stories, especially during slavery when people weren’t allowed to read or write.

“Every quilt is a learning tool,” she said. “And these are untold stories that people don’t know about. So it’s important to me, as a curator, it’s important to me as an African American, that viewers outside of my race know these stories and know that we’ve contributed to the web of what’s great , what made this country. From the day we left the slave ship, we have been valuable participants and contributors.

Network artists come from across the country, bringing a variety of quilt styles and techniques to the exhibit.

Carolyn Crump from Houston made several quilts in the exhibit. With “The Truth Hurts: Riches, Resentments, Revenge, RIOTS”, she depicts the slaughter of the Tulsa race. For two days in 1921, mobs of white Oklahoma City residents destroyed its thriving African-American neighborhood known as Black Wall Street, killing dozens and injuring hundreds.

Crump is a formally trained painter, which is reflected in the use of perspective and the ability to render 3D images in this piece. In the foreground, a well-dressed black man holds a newspaper describing the massacre on the front page. On the sleeves of his thread-rendered script blazer, he is identified as OW Gurley, one of Tulsa’s wealthiest men before the massacre forced him to flee. A brief biography of his life follows on the sleeves.

Are you planning your weekend?

Subscribe to our free newsletter Top 5 things to do

Every Thursday, we’ll give you ideas for going out, staying at home or spending time outdoors.

Want more of our free weekly newsletters in your inbox? Let’s start.

A different portrayal of black entrepreneurship is shown in L’Merchie Frazier’s “Call Me Mrs. Mary E. Pleasant: The Midas Touch.” Mary Ellen Pleasant found fortune and fame during the San Francisco Gold Rush era. She lived from 1814 to 1904 and went from indentured servant to self-made millionaire. During her lifetime, she raised over $30 million. She was also a civil rights activist and benefactor.

Frazier plays with shape and dimension in the quilt which features a portrait of Pleasant, an iconic San Francisco streetcar and a mansion.

Chicago’s Dorothy Burge cut out Mary Fields – known as Stagecoach Mary – for her quilt, which is the only one in the exhibit not framed by square borders. Born into slavery in the early 1830s, Fields was freed after the Civil War. She moved to Montana in 1885 after working as a laundress on riverboats. Fast forward a decade, and Fields became the second female and first African-American female star route carrier in the United States. Her reliability and speed earned her the nickname Stagecoach Mary, and at 6 feet tall, people knew not to mess with the tough-drinking, fast-shooting woman who wore men’s clothes. . Still, she was praised for her kindness and loyalty. She became a Wild West legend also known as Black Mary and White Crow.

Burge’s choice to make a cutout of this legend was the correct one; she cuts a fierce figure that stands out against the wall.

Another surprising aspect of the stories is the early involvement of black people in Mormonism. Earamichia Brown pays homage to African-American Mormon pioneer Elijah Abel with her quilt, “He Is Able.” Abel was an associate of Joseph Smith, founder and prophet of The Church of Jesus Christ of Latter-day Saints. Abel was ordained to the priesthood of the church in 1836, making him one of the first and last African Americans to hold the office for decades. But in 1852, Brigham Young banned blacks from the church, a ban that lasted until 1978.

Brown uses cyanotype printing to give the quilt the feeling of two-tone images of the era. The quilt depicts the Mormon Trail, covered wagons heading West, and the landscape and records of the West.

These are just a few examples of the many fascinating stories of black pioneers and the skilled quilters who describe them. Their story needs to be revisited. The exhibit will travel across the country after its presentation at the James Museum, a wonderful way to spread this important information.

If you are going to