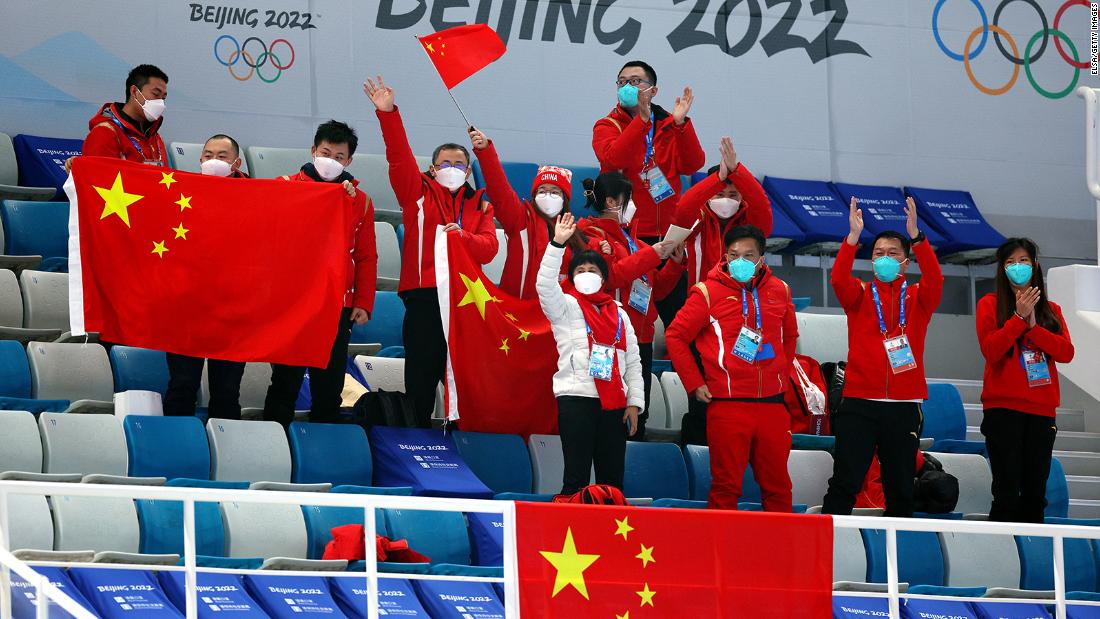 The Olympics were a success inside China. And it’s the public that Beijing cares about

But the past two weeks have also shown the world two very different Games: For China, Beijing 2022 was a resounding success that exceeded all expectations. For the rest of the world, it remained a deeply polarizing event, one that projected not only China’s rise to power but also its growing assertiveness, ready to challenge and defy its critics.

In its meticulously managed “closed loop”, the ubiquitous face masks, endless sprays of disinfectant and rigorous daily testing have paid off. Infections brought into the country were quickly identified and contained, allowing the Games to go largely Covid-free even as the Omicron variant raged around the world.
In the medal table, the Chinese team won nine gold medals and a total of 15 medals, delivering its best result in the Winter Olympics and ranking ahead of the United States. The outstanding performances of its new Olympic stars – from freeskiing sensation Eileen Gu to snowboarding prodigy Su Yiming – captivated fans in the stands and across the country, sparking a wave of pride.
As of Wednesday, nearly 600 million people – or 40% of China’s population – had watched the Games on television in China, according to the International Olympic Committee (IOC). And while viewership figures in the United States have been significantly lower than previous Olympics, rising Chinese audiences will likely make Beijing 2022 one of the most-watched Winter Games in history.
Even the official mascot Bing Dwen Dwen, a panda wearing an ice shell, proved to be a national hit. Having been mostly ignored for more than two years since its first appearance, the chubby bear gained popularity during the Games, regularly trending on Chinese social media. In souvenir shops inside and outside the bubble, people lined up for hours – sometimes in bitter cold – to bring home replica stuffed toys.

And for the ruling Communist Party and its supreme leader Xi Jinping, it is the domestic public that matters most. Xi has personally supported Beijing’s bid to host the Games and has made a series of visits to ice rinks and snow slopes to inspect preparatory work. The success of the Games offers Xi a moment of national unity as he prepares for an unprecedented third term in office this fall.

But for the Chinese government, part of national success also comes from avoiding major political scandal or embarrassment. While the doping saga surrounding a teenage Russian figure skater has cast a shadow over the Olympics, it has been downplayed in China. The same goes for reviews of the Games in general, most of which are censored and blocked.
At the start of the Games, many athletes from Western countries were stunned by the strict Covid restrictions they faced upon arriving in Beijing. Some have been placed in solitary confinement for weeks after testing positive, while others have complained about the bland food served in quarantine. But their criticisms – including an emotional plea for help from a Belgian athlete – went completely unheeded in China.

Instead, Chinese state media eagerly shared social media videos, posts and comments from athletes who portrayed their life inside the Olympic Village in a positive light, praising the food, Covid measures and the friendly volunteers.

And much to the relief of government officials in Beijing, not a single athlete or Olympics participant attempted to use the event to publicly protest China’s human rights record – a matter hot in the run-up to the Olympics (although some have expressed critical views).

In December, the United States and its allies declared a diplomatic boycott of the Games against China’s crackdown on Uyghur Muslims in Xinjiang – which Washington has called a genocide. But apart from the notable absence of Western leaders at the opening ceremony, the impact of the boycott has rarely been felt on the ground.

“You can’t write stories about people who aren’t in Beijing – that’s the problem with the diplomatic boycott. There’s no story once the Games start,” Susan said. Brownell, an expert on Chinese sports and the Olympics at the University. of Missouri-St. Louis.

“I predicted early on that political issues would take a back seat and sport would be front page news, and that would be the memory that would stick, at least for the general public. I think that largely happened, Brownell added.

Go on the offensive

But Beijing was not just waiting for the political controversies to fade. He has gone on the offensive, using the Games to push his own political message and hit back at criticism – although he has repeatedly ridiculed Western governments for “politicizing” the Olympics.

As the torch relay began just before the Games, state media reported that a Chinese soldier involved in a deadly border clash with Indian troops was among the few chosen to carry the Olympic flame. The report immediately sparked outrage in India, prompting New Delhi to join the US-led diplomatic boycott.

The next day, in a symbolic closing of the highly choreographed opening ceremony, Chinese organizers chose Dinigeer Yilamujiang, a little-known Uyghur cross-country skier, to deliver the flame from the Olympic cauldron. (His name could also be spelled as Dilnigar Ilhamjan.) For many outside China, this was seen as a deliberate attempt by Beijing to confront criticism over its treatment of Uyghurs.
Then there was the high-profile appearance of Peng Shuai, a Chinese tennis star and three-time Olympian who was the center of global concern after she was silenced for accusing a former top Communist Party leader of sexual assault. .
At those Games, Peng met IOC President Thomas Bach for a dinner, gave an interview to French sports news site L’Equipe – during which she denied ever accusing anyone of sexual assault. or have disappeared from public view – and was seen in the stands watching the Chinese team compete in events including curling, figure skating and freestyle skiing.

His flurry of activity made headlines around the world – and like his previous public appearances, they failed to allay wider concerns about his freedoms. In China, however, none of this was reported by state media or shared on social media, where Peng’s name remains censored.

And as the Olympics drew to a close, the political messages became more pugnacious.

At a press conference on Thursday, Yan Jiarong, spokesman for the Beijing Olympic Games Organizing Committee (BOCOG), was asked about the presence of the Taiwanese delegation at the closing ceremony on Sunday.

Yan, a former Chinese representative to the United Nations, used the occasion to assert China’s sovereignty claims over self-governing democracy. “What I mean is that there is only one China in the world. Taiwan is an indivisible part of China,” she said.

She also responded to CNN’s question about whether the Olympic uniforms were made by forced labor in Xinjiang, calling the forced labor accusations a “lie invented by forces with ulterior motives.”

Yan’s comments – which appeared to be an outright violation of Olympic rules on political neutrality – drew a rare rebuke from Bach, the IOC president.

“We were in touch with the Beijing Olympic Games Organizing Committee (BOCOG) immediately after this press conference,” Bach said, “and both organizations, BOCOG and the IOC, reaffirmed their unequivocal commitment to remain politically neutral as required by the Olympic charter.”

While the Chinese government may view the combative remarks as a propaganda victory, for many international viewers they serve as a reminder of just how politically charged these Games are, despite the organizational success and sporting achievements.

“The Games as a standalone event went very well, and China did well. The organization was phenomenal,” said Mark Dreyer, founder of China Sports Insider in Beijing.

“But again, it depends on the perspective you take. Are you just looking through that narrow lens? Because if you look at China as a whole, the narrative (from outside China) is about a lot more China using these games to wash sports… I don’t think it’s going to really change people’s view of China as a country.”