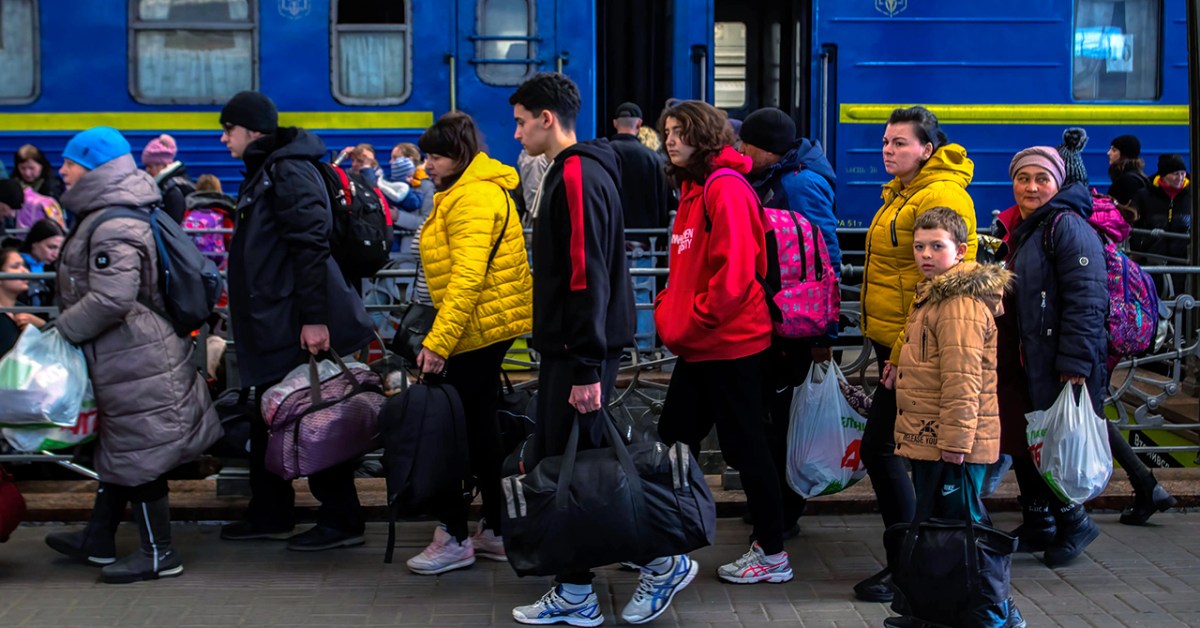 The Ukrainian refugee crisis ranks among the worst in recent history

Russia’s invasion of Ukraine created one of the greatest refugee crises of modern times. A month after the start of the war, more than 3.7 million Ukrainians have fled to neighboring countries – the sixth largest refugee flow in the past 60-plus years, according to an analysis of United Nations data from the Pew Research Center.

There are now almost as many Ukrainian refugees as there were Afghan refugees fleeing the (first) Taliban regime in 2001, according to figures compiled by the United Nations High Commissioner for Refugees (UNHCR). They make up around 9.1% of Ukraine’s pre-invasion population of around 41.1 million, ranking the current crisis 16th out of 28 major refugee crises by share of population.

The Center examined all cases in the UNHCR database since 1960 where there were at least 500,000 refugees and other displaced persons from a given country in a given year. The analysis does not include ‘internally displaced persons’, i.e. those who have fled or been forced to leave their usual place of residence but have not yet crossed a border. international. (Earlier this week, UNHCR chief Filippo Grandi estimated that a total of 10 million Ukrainians – almost a quarter of the population – had been internally or externally displaced by the war. )

This post aims to place the mass exodus of Ukrainians fleeing the invasion of their country by Russian forces in the context of other major refugee crises in recent decades.

The terminology around refugees and other displaced people can be confusing, if not counter-intuitive. The definition of “refugee” in US law mirrors that of the 1951 United Nations convention that governs the international treatment of refugees. The convention defines a refugee as a person who finds himself outside the country of his nationality and who is unable (or unwilling) to return there or avail himself of its protection, because of a “well-founded fear of being persecuted”. for reasons of race, religion, nationality, membership of a certain social group or political opinion”.

Whether or not a person qualifies as a refugee is usually determined either by the country to which they have fled or by the United Nations High Commissioner for Refugees (UNHCR). Until this decision is taken, a displaced person applying for international protection is referred to as an “asylum seeker”. We have included asylum seekers in our refugee counts.

For Venezuela, we have also included a special UNHCR category called “Venezuelans displaced abroad” – essentially, people who have fled Venezuela’s political and economic turmoil and have found a way other than to acquire the status to remain legally in another country, or who are living in another country without legal authorization or formal protection and have not applied for refugee status.

Because we have chosen to focus on refugees and others who have fled their country of origin, we have not included ‘internally displaced persons’ in our analysis. These are people who have been forced to flee their usual place of residence due to “armed conflict, situations of generalized violence, human rights violations or natural or man-made disasters” but who have not crossed any international border.

Our main source for counting refugees, asylum seekers and similar groups was UNHCR’s Refugee Data Finder app, which typically contains country-specific data from the 1960s to the present day. The agency also has a webpage specifically dedicated to the crisis in Ukraine, from which we have drawn the number of refugees from that country. Ukraine’s estimated population as of February 1 (excluding Crimea, which was illegally annexed by Russia in 2014) was 41,130,432, according to the country’s census agency. Historical population estimates for other countries are from the UN Department of Economic and Social Affairs.

For each country in the UNHCR database, we have identified the years in which there were at least 500,000 refugees and asylum seekers from that country. Since in most cases these years were part of longer wars or other crises, we have grouped them into 28 separate refugee-generating events. For each multi-year event, we took the year in which there were the most refugees and asylum seekers, and then divided that figure by the country’s total population for that year.

Syria’s civil war, which began in 2011, has created more refugees than any other crisis since the early 1960s, when UNHCR began keeping data on every country. Nearly 6.9 million Syrians – about a third of the country’s pre-war population – live as refugees or asylum seekers outside their home country, including nearly 3.7 million currently in Turkey. A further 6.8 million Syrians have been displaced from their homes but live elsewhere in the country, meaning the civil war has uprooted around two-thirds of Syria’s total population.

Afghanistan, which has been at war with itself or outside forces for more than four decades, has had more than 2 million refugees every year since 1981. The peak year was 1990, after the withdrawal of Soviet troops of the country and the USSR. supported government was struggling to hold on to power against a coalition of mujahideen groups. That year, more than half of the country’s estimated total population – 6.3 million people – were listed as refugees.

Venezuela has also seen mass exoduses of people in recent years as the country’s economy nearly collapsed, its government cracked down on dissent, and opposition efforts to overthrow the government of President Nicolas Maduro are at a standstill. According to the UNHCR, more than 5 million Venezuelans are refugees in other countries, seek asylum or have been otherwise displaced abroad – in total, around 15% of the estimated current population.