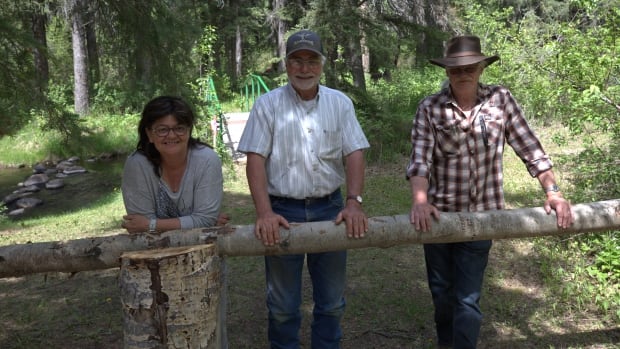 These 3 Sask. regional parks are treasure troves of memories, history and natural splendor

Summer is camping. And many of us have certain parks that we flock to with RVs, tents, and barbecues.

Regional parks hold a special place in the hearts of many people – some have frequented the same regional parks for most, if not all, of their lives.

So prepare your picnic baskets and umbrellas. It’s time to hop in the car and drive to three of Saskatchewan’s most beloved regional parks.

Pine Cree Regional Park – 17 kilometers north of Eastend in southwestern Saskatchewan – is a magical little nature park in the Cypress Hills. It has 27 unserviced sites, many of which are located along the upper reaches of Swift Current Creek.

What strikes visitors first is how dense the park is with trees, said Don Lundberg, vice chairman of the Pine Cree Regional Park Board.

“People from Vancouver Island to the Maritimes … land in Regina and come down here, and there’s not a tree. There’s almost nothing to see,” Lundberg said.

Lundberg has lived in the area all his life and the park holds special memories for him. When he was a child, his school traveled to Pine Cree for end-of-year field trips.

“Now today the kids, heck, they’ll go to Italy or England. My kids did. But we would come to Pine Cree. We were really excited. Like, it was a major event.”

About 60 kids swarmed around the regional park on these trips, enjoying all the trails and wildlife.

“We always got out on the bus in the morning and had a roast sausage in time to catch the afternoon buses home. And oh, we went wild!”

Cry of the Pines by Everett Baker

Saskatchewan legend Everett Baker has a lot to do with the creation of Pine Cree Regional Park.

In 1917, Baker came to southern Saskatchewan from his home state of Minnesota to sell books door to door, according to Hugh Henry, president of the Saskatchewan History & Folklore Society.

After briefly returning to Minnesota to get married, Baker returned to Saskatchewan with his new wife to put down roots. Over the next few years, he farmed, became involved with the Saskatchewan Grain Growers’ Association and the Saskatchewan Wheat Pool, and cultivated a love of photography.

The Bakers moved to Shaunavon, about 30 kilometers east of Pine Cree, in 1948.

“He would have been involved with Pine Cree early on. A lot of people attribute that to his idea, and he did the initial work for it,” Henry said.

Baker began developing Pine Cree in the 1950s as a place where people could come and enjoy nature.

“It kind of stemmed from his interest in history, and in particular trying to make connections with the Sitting Bull and the Lakota. [and find out] where some of their campsites may have been.”

Henry said that through his talks with the native peoples of the area, Baker learned that the area where Pine Cree Regional Park is currently located would be a great place for camping.

“It was a very special place for him.”

For a while, locals called the campground Baker’s Coulee, but he didn’t want it to continue.

“He didn’t want any kind of personal notoriety for it and preferred, again, to make a connection to the native history there. And so it’s his recommendation that it be called Pine Cree,” Henry said.

Pine Cree Regional Park has several trails that will take you through thick bushes and fields of wildflowers. And if you follow one of the trails to the end of the campground, you’ll come across a sign that says “Hermit Cave”.

At the end of a stack of wooden stairs is a small structure sticking out of a hill. The legend of this “cave” dates back to the late 1960s.

“A geologist dug a hole in the side of the hill here, and he spent a winter here living in this hole in the ground,” Lundberg said.

“People call him a hermit, but he’s actually a reclusive geologist.”

He remembers the man, whose name he does not remember, walking through Eastend in the dead of winter to get supplies. Lundberg and his father sometimes took him to town.

“He was just a different character. But the legend became more than the man, over time. He really was a different guy.”

The geologist spent about 10 months living on the hillside, then one day just left, never to return. But the locals will never forget it.

When you drive into Last Mountain Regional Park, about 100 kilometers north of Regina, you’ll be greeted by poplars, ash, maple, oak, and spruce.

The regional park is divided between campsites and cabins. There are 100 cabin lots and 114 campgrounds. Don Delhomeau has been a cabin owner at Last Mountain since 1979 and loves his summer home.

“It’s about the sense of community… [That’s] how it started and largely remains,” Delhomeau said.

“There are people from all over. We have cabin owners from Alberta and many places in Saskatchewan. But the core is still the local people.”

Saskatchewan is hardly known for its mountains. So why “Last Mountain?”

The name of the park comes from a Cree legend describing how the Great Spirit created the nearby hills, east of Duval, from earth extracted from the valley now occupied by Last Mountain Lake.

Although Last Mountain is known for its summer activities, it is extremely peaceful.

“I think the most important thing for me is quiet,” said Skoropata, who had a cabin at Last Mountain Park for 26 years.

“We used to live in Regina when we started coming here to get away from the noise. It was so nice and quiet and peaceful here. And at night it’s so crystal clear. It’s so beautiful here.”

For Kathy Bergen, co-manager of Manitou and District Regional Park, the campground is an unofficial family business.

“I followed in my daughter’s footsteps because when she was in high school and college she worked here for five years,” said Bergen, who works at Manitou, about 100 kilometers southeast. of Saskatoon, for 17 years.

“So it’s been in the family for a long time and my husband runs the website. So yeah, it’s kind of a family business.”

It’s not uncommon to hear this kind of story in Saskatchewan’s regional parks. Many families have deep ties to the parks that have marked their summers for so many years.

Bergen’s co-director is Heather Martin, who has vivid memories of the sights, feels and smells associated with Manitou Beach, the regional park, the drive-in theater and Danceland, the local dance hall. For Martin, the smell of fries and vinegar will always bring her back to late nights by the beach.

“When my kids were little, which was probably 30 years ago, we used to come and camp here. The trees were all a fraction of the size they are now, and you could park there and you could catch the drive- in your seat,” Martin said.

“So the kids would sit out there in the trees with their blankets and their radios … and watch the drive-in. That would probably be one of the best memories for me.”

The Manitou Beach drive-in has been around for so long that Martin remembers the first movie she saw herself when she was young: the 1973 movie starring Joe Don Baker Walk with your head held high.

Manitou Beach is known for its mineral waters, brine shrimp and many local attractions. But the regional park can be easy to miss if you’re driving through the area. Its proximity to the beach is the big draw, but it also has a large children’s park with a zip line, as well as 200 campsites.

Martin said his connection to the park is not unique, as Saskatchewan residents have a long love affair with regional parks.

“People have said how much they like Saskatchewan’s regional parks because they’re sometimes easier to book than provincial parks, and maybe the upkeep is more polished,” she said. .

“And it’s a personal experience that people have. And so yes, regional parks are very, very popular across Saskatchewan.”