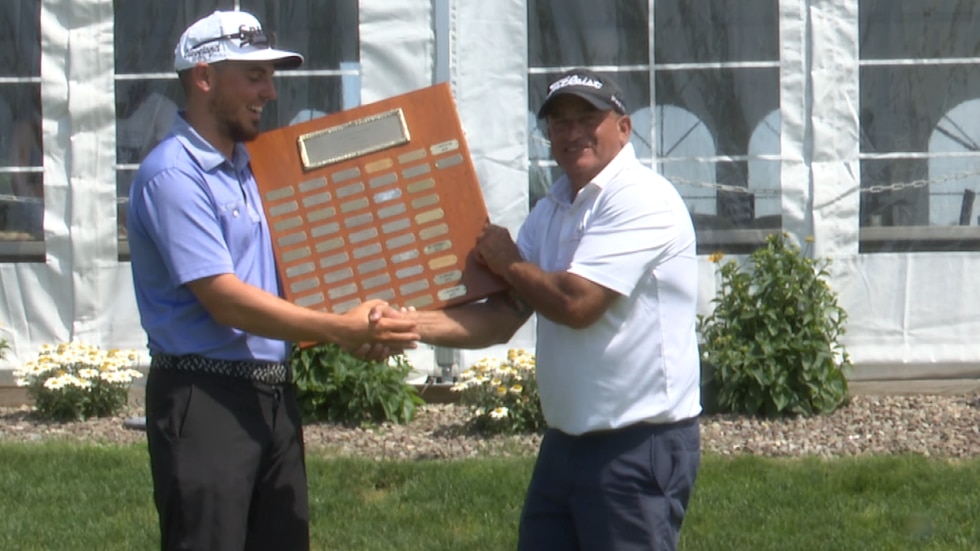 Tufo would equalize the first hole to mount one. He then extends his lead to 3 as Kernehan narrowly misses the putt there.

It was Kernehan with better fortune on the par-3 5th as he sank that putt to reduce Tufo’s lead to a hole.

Kernehan then sinks his putt on 6, tying the match.

Joe Tufo breaks the tie with a nice birdie putt on 10, sinking it to go up 1.

Back comes Dylan Kernehan on the 12th, sinking that putt to tie the game.

Tufo regains the lead at 13, sinking his putt to mount one.

But then it was Kernehan with a chip on the green, which again tied the game on 14.

Tufo responds in a big way, taking the last 2 holes of the 18-hole morning session to mount 2.

Tufo then takes 7 of the first 8 holes in the afternoon session, sinking the putt here to go up 3. Tufo then birdies and 20th hole to go up 4.

Tufo was on a roll. He goes up 5 while driving another with his hot putter.

The drive of the day on the par-3 5th hole was Joe Tufo with a dart to the green, bringing him closer to the hole. From there he sinks the birdie putt to come up 6.

Now on the 7th green, Tufo was up 7 and makes it 8 as he sinks another putt.

Tufo looks to close the match on the 29th hole of the match and he does it in style. The hole ends the match as Joe Tufo beats Dylan Kernehan 9 and 7.

For Tufo, the series of holes ending the morning session and starting the afternoon outing was the difference in this game.

History was made at the 2022 Bassmaster Elite Guaranteed Rate St. Lawrence River in Clayton on Sunday, as Jay Przekurat posted the highest 4-day total in Bassmaster history with 102lbs 9oz and won the first prize, edging out Cory Johnston who became the first angler to cross the century mark with a 4-day total of 100lbs 5oz.

The rookie talked about rewriting the record books after his historic weekend on the St. Lawrence River.

“Trying to, like, take advantage of the moment during the day of the tournament. It’s kind of hard because you’re just focusing on catching 5 pounds there and then when you finally get to that point and you run to the crawls and you start to get a little emotional, there’s no other feeling like it. This is my first year of fishing in the Elite series and wow, amazing,” Przekurat said.

Sunday marked the last day of competition for the 2 weekend 1812 Shootout at the grounds of Madison Barracks in Sackets Harbor.

On Sunday, the high school girls’ teams took to the field with the participation of the 3rd and 4th, 5th and 6th, modified, JV and university teams.

14 varsity teams from across New York State were in attendance with a total of 24 JV and Varsity teams.

2022-07-18
Previous Post: Joe Biden’s age is not his problem
Next Post: New study from Karnataka highlights impact of wind farms on biodiversity