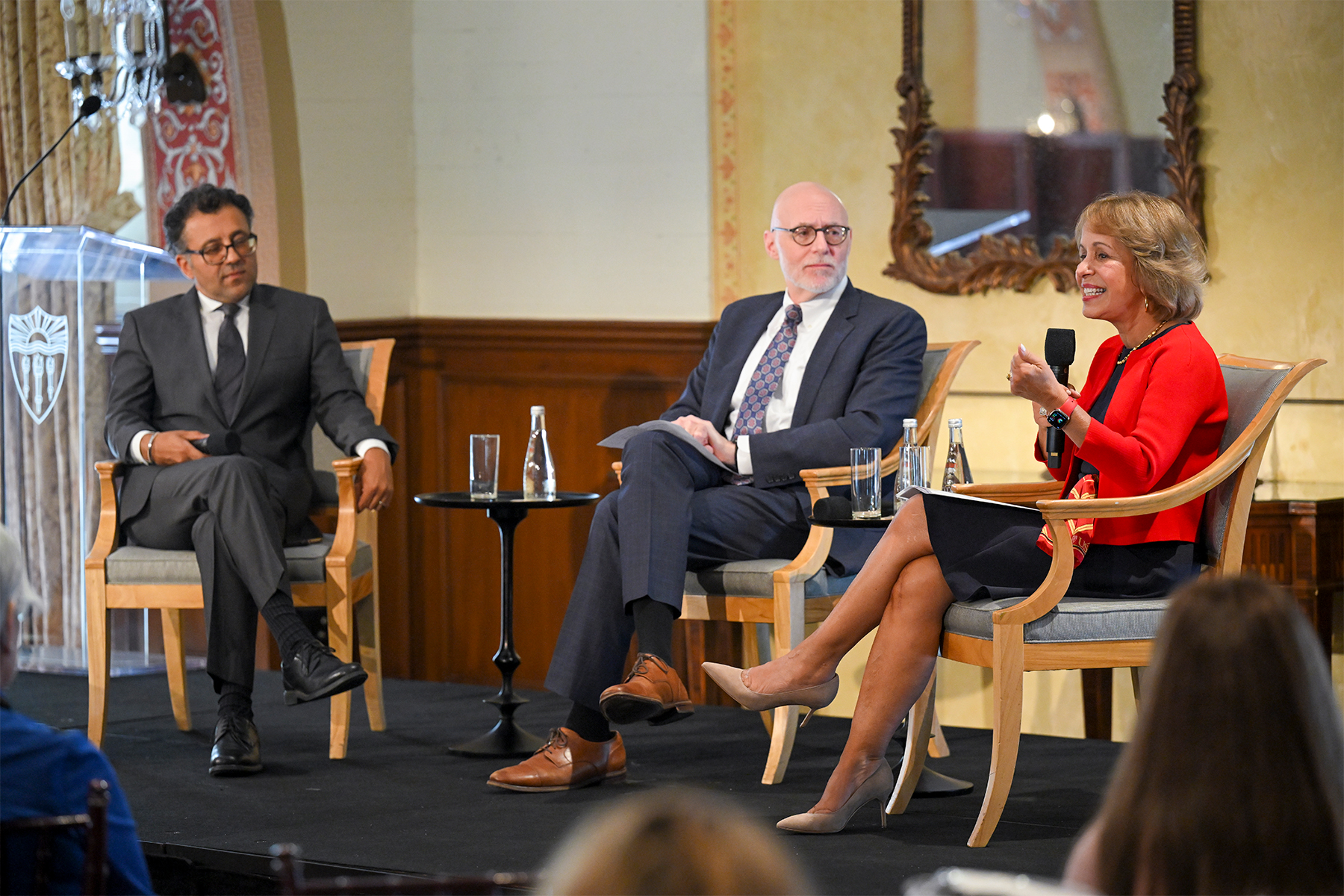 USC and the Hebrew Union College-Jewish Institute of Religion celebrated their half-century partnership on Monday and marked the continuation of their relationship — recently extended by at least 25 years.

“It’s an honor to be here today to celebrate the great vision that led to this partnership, the work of so many who have contributed to it over the years, our shared history and our continued responsibility to educate future generations in Jewish studies and to build a better and fairer future,” USC President Carol L. Folt said during Monday’s celebration at USC’s Town and Gown facility.

Through the partnership of the two schools, the Louchheim School for Judaic Studies at HUC serves as the undergraduate Jewish studies program at USC, and a graduate certificate program allows USC doctoral students to s enroll in credited courses at HUC. USC students also have access to HUC’s 700,000-volume library, one of the largest Jewish libraries in the country.

In turn, students at HUC’s Zelikow School of Jewish Nonprofit Management pursue a variety of dual graduate degrees at USC. HUC students can also participate in events through USC organizations, including the USC Casden Institute, USC Chabad, USC Hillel, and the USC Shoah Foundation, with its vast collection of Holocaust testimonies and his extensive research on genocides around the world.

There really is nothing else like it in this country.

“There really is nothing else like it in this country,” Folt said.

When the USC-HUC deal began, Folt said, USC had only a handful of Jewish studies classes. Today, the schools jointly offer one of the strongest Jewish studies programs in the country, with hundreds of undergraduate students enrolling in classes each year.

The partnership between the two schools began in 1971 when HUC moved its Los Angeles campus from Hollywood to University Park.

Just a year later, anti-Jewish hatred made international headlines when 11 Israeli athletes and coaches were murdered by terrorists at the Montreal Olympics.

“We need to remember our history,” Folt said. “It is our responsibility to teach our history to every generation.”

Joshua Holo, dean of the HUC campus a short walk from USC’s University Park campus, compared the schools’ partnership to the “special relationship” the US has with the UK, in which the Atlantic Ocean unites rather than divide.

“Jefferson Boulevard turned out not to be an obstacle, but a bridge,” Holo said. The partnership, Holo added, “embodies a fundamental common goal: excellence in higher education.”

He also praised Folt’s support for Jewish students at USC, especially during recent instances of anti-Semitism.

In January, Folt created the Advisory Committee on Jewish Life at USC amid rising anti-Semitism in the United States and on campuses across the country, including USC. She noted that several of the committee’s recommendations are already being implemented, including establishing a kosher kitchen; improve vacation policies; include Jewish voices in university discussions on diversity, equity and inclusion; and provide training on antisemitism to students, faculty and staff.

During a discussion moderated by USC Dean of Religious and Spiritual Life Varun Soni, Folt and HUC President Andrew Rehfeld were asked about how the two institutions can work together to combat growing feelings of anti-Semitism. (“What happens in the world happens on campus,” Soni said.)

Rehfeld identified three steps to dealing with such hatred: Name it; condemn him; and do something about it. Folt said that because of social media, it’s often unclear where the remarks are coming from — or even how widespread those sentiments really are.

Developing leaders on both campuses

Folt also noted that the company’s approach to developing leaders has changed dramatically.

“We used to think of leadership as something that happened to a person over time,” Folt said, and that some people are considered born leaders. Now people are realizing that “there are so many aspects of leadership that can be taught, coached, modeled,” she said.

Further, she said that today’s students equate leadership with impact, and that leaders must act with integrity, be open to dissent, and demonstrate humility.

Diversity and inclusion are not just moral values ​​that we share. These are intellectual values.

Folt also cited USC’s new “student commitment” — featured at last month’s student reconvene — as a model for sharing Trojan family values, including acting with integrity; embrace diversity, equity and inclusion; engage in open communication; and be responsible for their actions.

Rehfeld — who leads the HUC system of four campuses in Los Angeles, Cincinnati, New York and Jerusalem — noted the moral and civic values ​​shared by the two institutions.

“Diversity and inclusion are not just moral values ​​that we share. These are intellectual values,” he said, adding, “Reason and science drive our understanding of the world.”