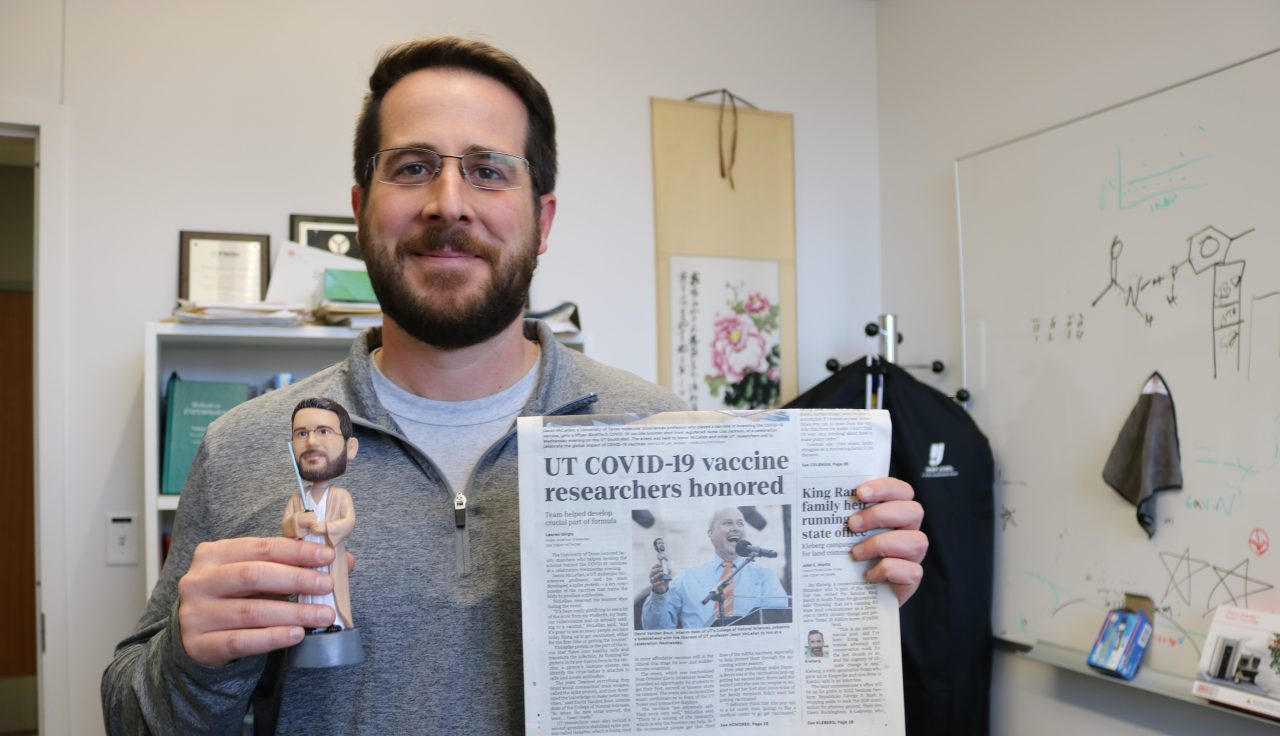 AUSTIN (KXAN) – The same strategy used to create the COVID-19 vaccine is now helping researchers tackle another priority pathogen – and it all stems from research started here in Austin at the University of Texas.

“We have investigators here at UT who are not only working on the current pandemic, but are also trying to develop interventions for other families of viruses that may one day cause epidemics,” said Jason McLellan, professor of biosciences. molecules at UT’s College of Natural Sciences.

McLellan, who was named Texan Inventor of the Year in June, was instrumental in developing the technology used to create the COVID-19 vaccine.

According to a press release from UT, vaccines from Pfizer, Moderna, Johnson & Johnson and Novavax all use patented technology that McLellan helped develop alongside his former postdoctoral researcher in 2017.

More than six years of pre-pandemic biomedical research on methods such as structural virology and advanced protein stabilization prepared him for the breakthrough.

CARDS: How many people are fully vaccinated against COVID-19 in your zip code?

“When SARS-CoV-2, which is the causative agent of COVID-19, emerged in early 2020, we were able to quickly translate all of our previous research,” McLellan said.

The fight against CCHFV

Tick-borne disease causes death in 30-40% of documented cases. This is why the World Health Organization identifies the virus as one of its top priorities for research and development.

“This disease is pretty terrible, it’s very fatal, and it’s endemic across much of the world,” said Akaash Mishra, a graduate student of McLellan’s lab and the first author of the recently published CCHFV scientific manuscript.

The virus is transmitted to humans through tick bite or contact with infected animal blood, according to the WHO. Human-to-human transmission can occur as a result of close contact with the bodily fluids of an infected person.

The majority of cases have occurred in people involved in the livestock industry, especially agricultural workers, slaughterhouse workers and veterinarians.

According to the CDC, the onset of CCHFV is sudden, with initial signs and symptoms including headache, high fever, back pain, joint pain, stomach pain, and vomiting. As the disease progresses, a hemorrhagic phase causes bleeding in different organs.

The CCHFV is present throughout Europe, throughout the Mediterranean and in parts of Asia, Africa and the Middle East.

Mishra said that although the number of cases in these areas is rarely available, some “two thousand” infections have been reported each year in recent years.

Turkey alone reports around a thousand causes each year, and the remaining infections are mostly concentrated in the Middle East and the Balkan Peninsula.

Death rates vary from country to country, Mishra said. Turkey has reported rates between 3-9% of cases, while Afghanistan has reported deaths in 26-43% of cases.

Scientists said the endemic area in which CCHFV exists has grown in recent years.

Mishra said a major concern is the spread of CCHFV to new European countries.

A recent epidemic in Spain claimed one death and infected tick vectors appeared in neighboring countries in the region, such as Italy.

International trade in animals and ticks carried by migratory birds are other potential causes of spread.

“The CCHF is mainly located overseas, but as climate change occurs, as bird populations change, the tick begins to spread to other areas,” McLellan said.

While the virus may seem far away, infectious disease experts here in Austin have said preparation is key to tackling priority pathogens.

“A few years ago, even for coronaviruses, we didn’t know they would cause such a global pandemic. So it’s important that we are prepared for emerging viruses that could pose potential future threats, ”Mishra said.

The role of structural virology

Mishra started his doctorate. thesis on CCHFV when he joined the laboratory in 2018.

It was then that he began his work on structural virology – a technology which he said has been “very essential” in the development of vaccines against a variety of viruses.

Defined in a UT press release as “the use of extremely detailed imaging of viral components to find their weaknesses,” structural virology involves determining the three-dimensional atomic structure of a virus.

This method provides scientists with the information they need to design improved small molecules, vaccines and therapeutic antibodies.

Mishra said structural virology has been used in attempts to develop vaccines against HIV, influenza and respiratory syncytial virus (RSV).

Another essential element of McLellan Lab’s research has focused on determining a method of peak protein stabilization.

The spike protein found on the surface of the coronavirus wants to change shape in order to infect the host, McLellan explained.

By devising a way to prevent it from changing shape – by locking the protein in its pre-fused form – researchers are able to develop a vaccine.

McLellan said he and his students started working on a stabilization method in 2013. Three years later, they had made major strides working on vaccines for the Middle East respiratory syndrome coronavirus.

All of the viruses that we worked on in McLellan’s lab before CCHFV were “class I” fusion proteins, Mishra explained. These proteins are trimers in their pre-fusion state.

Mishra said CCHFV is the first of its kind to be studied at McLellan Lab because it falls into the category of “class II” fusion proteins. In contrast, these proteins form trimers from monomers on the viral surface when changing shape from pre-fusion to post-fusion.

The major difference between “class I” and “class II” lies in the evolution of viral families.

He said his team’s breakthroughs in CCHFV research can be applied to other related viruses with different types of fusion proteins.

“It’s very inspiring, honestly, to watch the story unfold right in front of you,” Mishra said. “Few people have this opportunity during their doctorate. “

Prometheus: The team behind the breakthrough

A research project called Prometheus is leading the fight against CCHFV.

The team is made up of McLellan and other university labs, biotech companies and the US Army Institute for Infectious Disease Medical Research, according to a press release.

Prometheus is funded by the US National Institute of Allergy and Infectious Diseases.

McLellan’s research was also supported by the Welch Foundation, a private funding source for chemical research at educational institutions in Texas.

McLellan said much of what scientists are learning and developing in his lab could be used to fight other priority pathogens in the future.

“It’s really exciting to see the research from the lab – from the benches behind me, from the post-doctoral students – being translated into molecules that go into people’s arms and impact human health,” McLellan said.