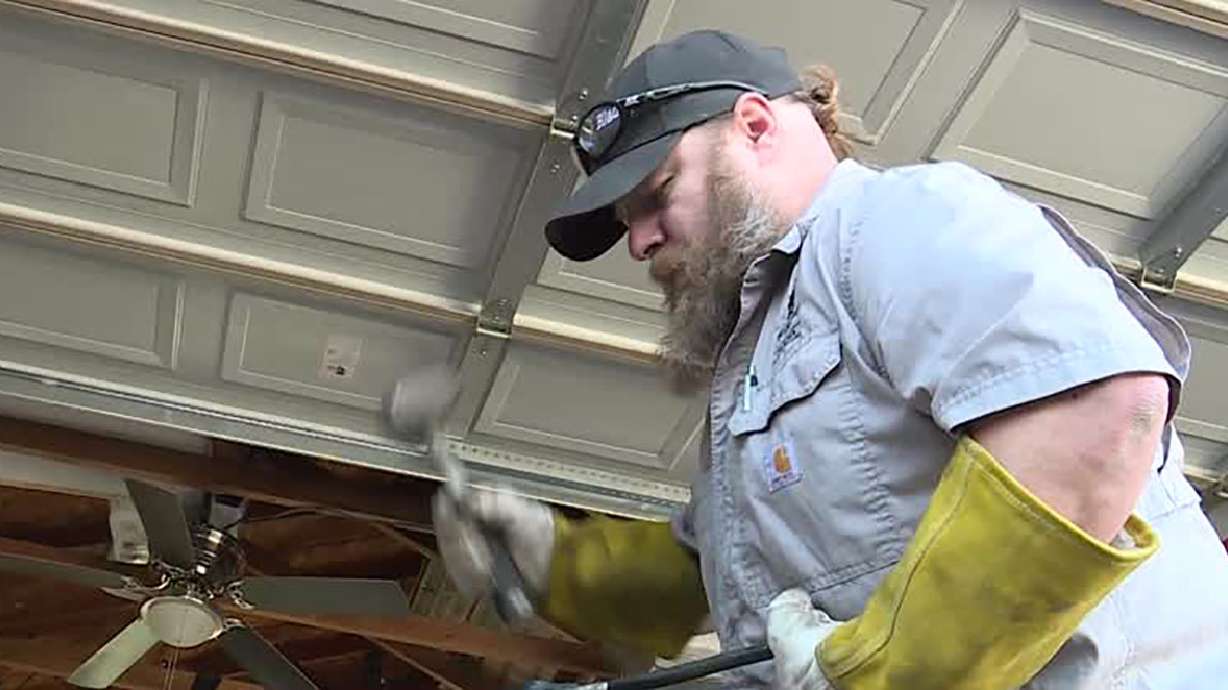 WEST VALLEY CITY — The word “art” has many different definitions. But for a man from Utah, designing and creating knives is his own art form – and it’s what led him to appear on the History Channel.

If you take one look at Nathan Anderson, sparks flying around his gloved hands in his garage, your ideas of how he spends his free time are probably wrong.

“I don’t watch football and I don’t drink beer,” he said with a laugh.

But if you close your eyes and conjure up the image of a guy making knives in his garage, his face might come to mind. And if you ask him what draws him to it, he’ll just smile and say, “I like sharp things.” It’s not as simple as that.

“There’s a lot of creativity in me and I’m just trying to get out there,” Anderson said.

For him, what he works on is art.

From sketching his designs to warring with a length of hot steel, each step involves bending reality to match an image forged in his mind.

“It’s something you have to crave because it’s hard work,” Anderson said. “It’s not an easy job.”

And make no mistake: it’s a job. He runs his own business, called “Limitless Blades.”

Although Anderson still has a full-time job, the dream has always been to turn his passion into a career.

“Cutlery doesn’t really have insurance,” laughed Anderson. “And I have a wife and five children.”

But he recently took a big step towards sharpening that dream. Someone in a cutlery group on Facebook reached out, and after months of waiting.

This email offered Nathan a chance to appear on a show called “Forged in Fire” on the History Channel. Competitors work to forge blades, vying for a cash prize.

Anderson had the chance to show off his skills to the experts by crafting a historically accurate executioner’s sword.

“They gave parameters like 42 to 44 inches long, and it had all the specs,” he said. “And they test it. They break stuff with it, it’s not like they’re nice to it.”

Anderson came in second, but he didn’t even have the slightest disappointment.

“In the cutlery world, even being on the show is a big deal. And so for me, it was like, ‘I’m here, this is awesome.'”

The notoriety of his appearance brought new demands and more orders for his business.

“They were messaging me, ‘Hey, you guys did a great job on the show, how about doing this,’ so that helped a lot,” Anderson said.

He may not look like your traditional idea of ​​an artist and his works may be etched on steel instead of painted on canvas, but if you ask Anderson, life is all about taking something. of raw and mold it into any shape you can imagine.

“It’s always been part of me, being creative and artistic,” he said.