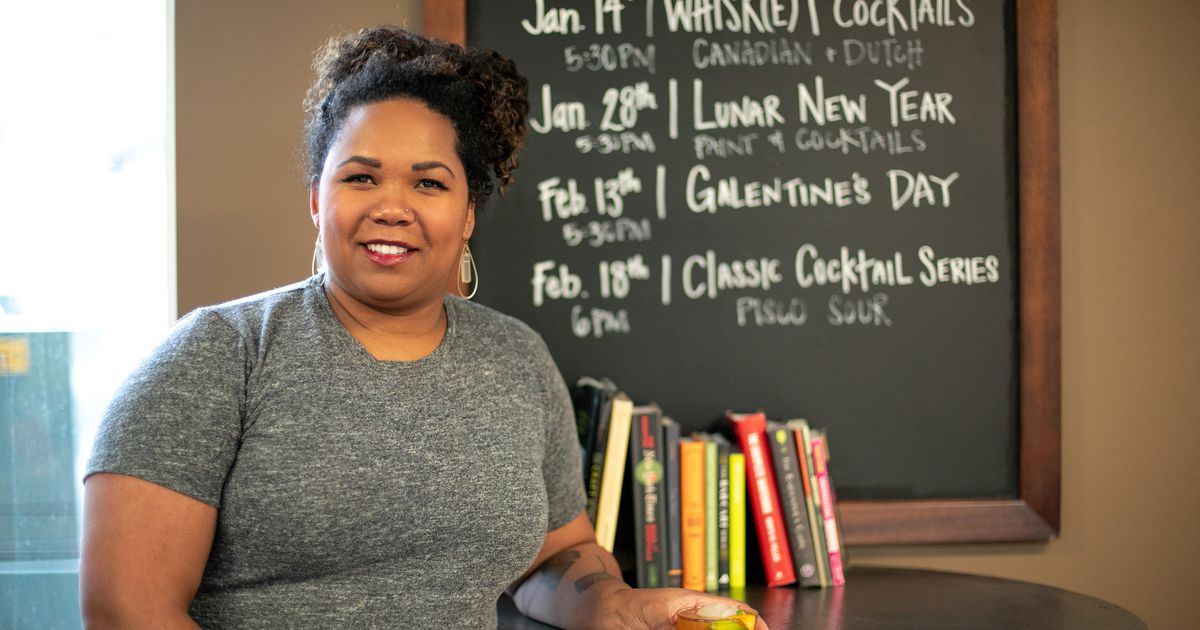 Alexi Fisher made her first cocktail in college, bartending throughout college while studying neuroscience at Westminster College and then clinical psychology at the University of Utah.

At the time, Fisher says, she was a member of The Church of Jesus Christ of Latter-day Saints, “so I didn’t really drink. I’m not going to lie – I was making these drinks and I was like, ‘I hope people like them. I’ve no idea!’ They did tip, she said, but she was never sure if they were just nice.

Thirteen years later, Fisher is COO of The Hammered Copper, an eco-friendly mobile bartending service that travels across Utah. In December, she opened Cocktail Collective, “a culinary school for spirits and cocktails” at ArtSpace Commons. It is the only such educational institution in Utah, and possibly in the country.

The Hammered Copper takes its name from a pair of copper mugs that Fisher and her husband, Joe, found at a thrift store. “We love Moscow mules,” she said. “Some of the best barware I’ve ever used is stuff I found, not bought.”

Fisher noted that copper gets louder the more it is bumped and used. She identifies with that.

After graduating, she went to work in the mental health sector, but found herself working 14 and 16 hour days in hostile and dysfunctional environments. Fisher said it was her husband who suggested “you should go back to the bartender – that’s the happiest last time I remember seeing you. You have to go back, and you have to.” We’ll find the rest.

After a disappointing run at several bars in Salt Lake City — where there was rarely a female bartender in sight — Fisher went freelance in 2010. “I had this baby thing very quickly,” she said. From 2013 to 2017, she served as the Western States Brand Ambassador for Johnnie Walker Scotch. She launched The Hammered Copper in 2018.

The Cocktail Collective emerged from the pandemic, when Fisher began teaching online classes and handing out unique vintage barware she had found while saving money.

She describes the Cocktail Collective space as “constantly rotating,” with a small boutique of vintage glassware and barware and homemade dehydrated garnishes, and flexible event space that can accommodate 46 to 60 people. Fisher pointed out that it’s not for events like weddings. “It’s meant to be a learning space,” she says. There are plenty of great places in Utah to learn about wine, she pointed out, but none for spirits and cocktails.

The other project Fisher created during the pandemic was The History of Drinking podcast. “My friends were fed up with me talking about the story of what we drank when we went out drinking,” she laughed. History is a big part of Cocktail Collective’s courses; she’ll have one later this month explaining why some countries distill whisky, and others distill whisky.

She teaches four Black History Month classes, two in-person and two virtual. She said they were personal to her as a black bartender. “But I also did a lot of research for them,” she said. “One aspect that I think is absolutely overlooked, especially for anyone who drinks or makes cocktails, or enjoys beer or wine, is how much of what we enjoy today is due to slaves and people who survived incredible hardships during the 16 and 20 1700s.”

The virtual classes, Feb. 17 and 24, will include cocktail parties linked to Cato Alexander and Louis Deal (who in 1893 faced racist backlash after being promoted from waiter to bartender at Cincinnati’s Atlas Hotel). Live classes on February 19 and 25 will focus on John Dabney (restorer and perfecter of mint julep) and Tom Bullock (the first black author of a cocktail book, “The Ideal Bartender”). Those taking the virtual classes can order a Black History Month cocktail kit that includes a jigger, all non-alcoholic ingredients, a recipe card and historical brochure, and bartender lingo.

“That last part is incredibly important,” Fisher said. “If you say you’re going to relax quickly or do a flip, people are like, ‘I don’t know what those words mean!’ I like to give people an index of all the verbiage they will need in general.

Fisher said she aimed to be a learning resource for other bartenders and mixologists, but she also wanted to educate people on how to mix, order and enjoy a great cocktail.

“When you go to a bar and you ask the bartender, ‘I don’t know what I want, what would you suggest?’ The bartender has a whole line of people at the bar, and they’re like, “I don’t have time to tell you!” So it’s kind of not just about giving people the ability to know what they like, but also knowing what’s on the shelf and what’s actually worth your dollar,” she said.

Telling people about their cocktail options, she said, is about “putting people at ease. It can be very intimidating, especially for women who go to the bar and don’t know what they want. We want to provide a safe space for people to learn all of these things.