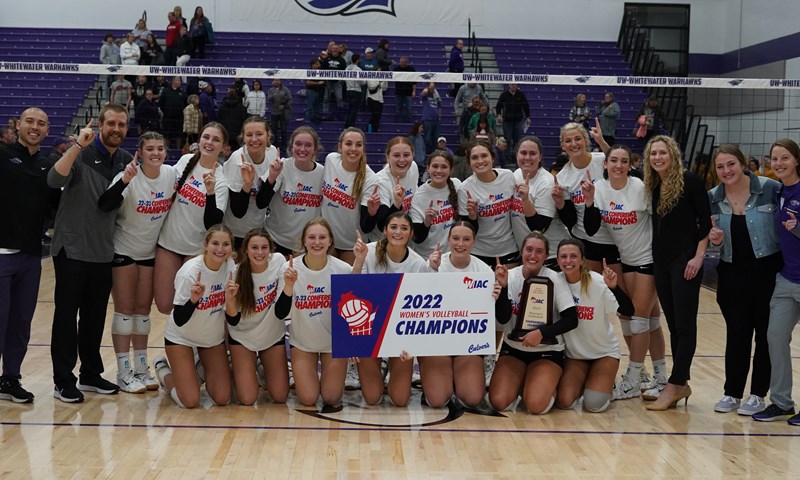 
The tournament title is the 17th in program history for the Warhawks, who also secured the conference’s automatic bid for the NCAA Division III championship with the victory.


UW-Whitewater, ranked No. 12 in this week’s American Volleyball Coaches Association NCAA Division III poll, hit over .230 in the final three sets of the game against No. 15 UW-Stevens Point .


The Pointers scored the first three points of the game before UW-Whitewater went on a 4-0 run to take the lead. The teams traded points until UW-Whitewater was able to find a small 15-11 cushion. Another short run gave the Warhawks seven points, 20-13. UW-Stevens Point cut the lead to three, 21-18, but UW-Whitewater scored four of the final six points capped by a Kirsten Anderson kill for the 25-20 first-set victory.


The momentum continued in the second set. Tight early on, the Warhawks went 11-2 to give them a 20-11 advantage. The Pointers didn’t fold, hung on and eventually made a six-run run to shoot within two, 22-20. Anderson and Payton Kuepers hammered back-to-back wins to force the set point. Still, UW-Stevens Point continued to battle through two set points until an error by Pointer allowed UW-Whitewater to take a 2-0 lead in the game.


In the third set, UW-Whitewater used a few points to take a lead of at least four points early on twice, but once again the Pointers fought back. UW-Stevens Point eventually took a 20-18 lead. From there, the teams traded points with the Pointers taking the set 25-23 to force a fourth.


The final set consisted entirely of Warhawks. UW-Whitewater took a 16-5 lead in the set and went the rest of the way for the 25-13 win and a match win.