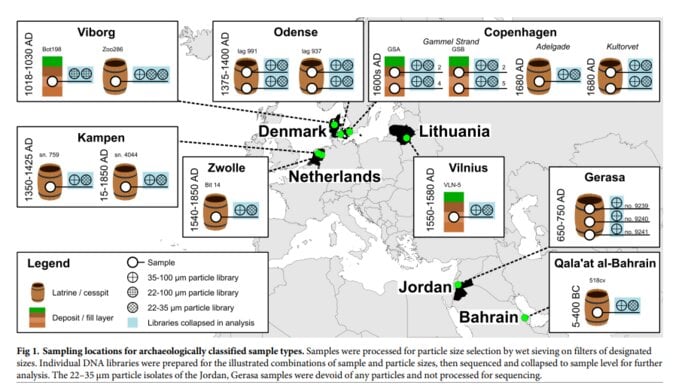 Using stool samples from Viking latrines, researchers genetically mapped one of the oldest human parasites – the whipworm. The mapping reflects the parasite’s global spread and its interaction with humans, a delicate relationship that can make us healthier and sicker.

Using fossilized eggs in feces dating back 2,500 years from Viking settlements in Denmark and other countries, researchers from the University of Copenhagen and the Wellcome Sanger Institute have performed the largest and most comprehensive genetic analysis insight into one of the oldest parasites found. in humans – whipworm.

The study, published in Nature Communication, presents completely new knowledge on the development and prehistoric dispersion of the parasite. This knowledge can be applied in efforts to prevent parasite drug resistance and its future spread.

The study suggests that humans and parasites have developed a delicate interaction over thousands of years, whereby the parasite tries to stay “under the radar” so as not to be repelled, giving it more time to infect others. new people. From other studies, whipworm is known to stimulate the human immune system and gut microbiome, to the mutual benefit of host and parasite.

While whipworm (Trichuris trichiura) is now rare in industrialized countries, and most often causes only minor problems in healthy individuals, the parasite is estimated to affect 500 million people in developing countries.

“In people who are malnourished or have a weakened immune system, whipworm can lead to serious illness. Our mapping of whipworm and its genetic development facilitates the design of more effective anti-worm drugs that can be used to prevent the spread of this parasite in poorer regions of the world,” says Professor Christian Kapel of the Department of Plant Sciences and environmental studies of the UCPH. .

The eggs, not the worms, allowed the researchers to examine the genetic material of whipworms thousands of years old. Due to the extremely durable chitin in the egg capsules, their internal DNA was well preserved while the eggs were buried in moist soil.

Examining samples of fossilized feces that had previously been discovered in the latrines of the Viking colonies of Viborg and Copenhagen, the researchers isolated the eggs under a microscope, sieved them from the feces and subjected them to elaborate genetic analyzes that the researchers have been perfecting for years in previous studies.

“We have known for a long time that we can detect 9,000-year-old parasite eggs under a microscope,” explains Christian Kapel, professor of zoology at the University of Copenhagen. “Fortunately for us, eggs are designed to survive in the ground for long periods of time. Under optimal conditions, even the genetic material of the parasite can be extremely well preserved. And some of the oldest eggs we’ve extracted DNA from are 5,000 years old. It was quite surprising to fully map the genome of well-preserved 1,000-year-old whipworm eggs in this new study.

The researchers examined archaeological stool samples from several locations. These ancient genetic samples are compared with contemporary samples obtained from people with whipworm around the world. This provided researchers with insight into the worm’s genome and how it evolved over tens of thousands of years.

“Unsurprisingly, we can see that the whipworm appears to have spread from Africa to the rest of the world with humans around 55,000 years ago, following the so-called ‘out of Africa’ human migration hypothesis. “, adds Kapel.

Can live undetected in the gut for months

A whipworm can reach five to seven centimeters in length and live unnoticed in the intestine of a healthy individual for several months. During this time, he continuously lays eggs, which are expelled through feces. In people with weakened immune systems, whipworm can cause a wide range of gastrointestinal illnesses, malnutrition, and even stunted child development.

Worms are transmitted by the fecal-oral route, which means that microscopic parasite eggs in soil can spread to drinking water or food, after which they are ingested through the mouth of a new host.

“The eggs lie in the ground and develop for about three months,” according to Christian Kapel. “Once matured, eggs can survive even longer in the wild, as they wait to be consumed by a new host in whose digestive tract they will hatch. Their whole life cycle is adapted to survive in the ground for as long as possible.

So, the heyday of these worms in our part of the world was when our toilet and kitchen conditions, as well as our personal hygiene, were very different from those of today.

“In Viking times and up until the Middle Ages, we didn’t have very sanitary conditions or well-separated kitchen and toilet facilities,” Kapel notes. “This gave the whipworm much better opportunities to spread. Today it is very rare in the industrialized part of the world. Unfortunately, favorable conditions for the spread still exist in the less developed regions of the world.

2022-09-08
Previous Post: ‘Why not me?’ How Frances Tiafoe became the player capable of history at the US Open
Next Post: Europe just experienced the hottest summer in its history