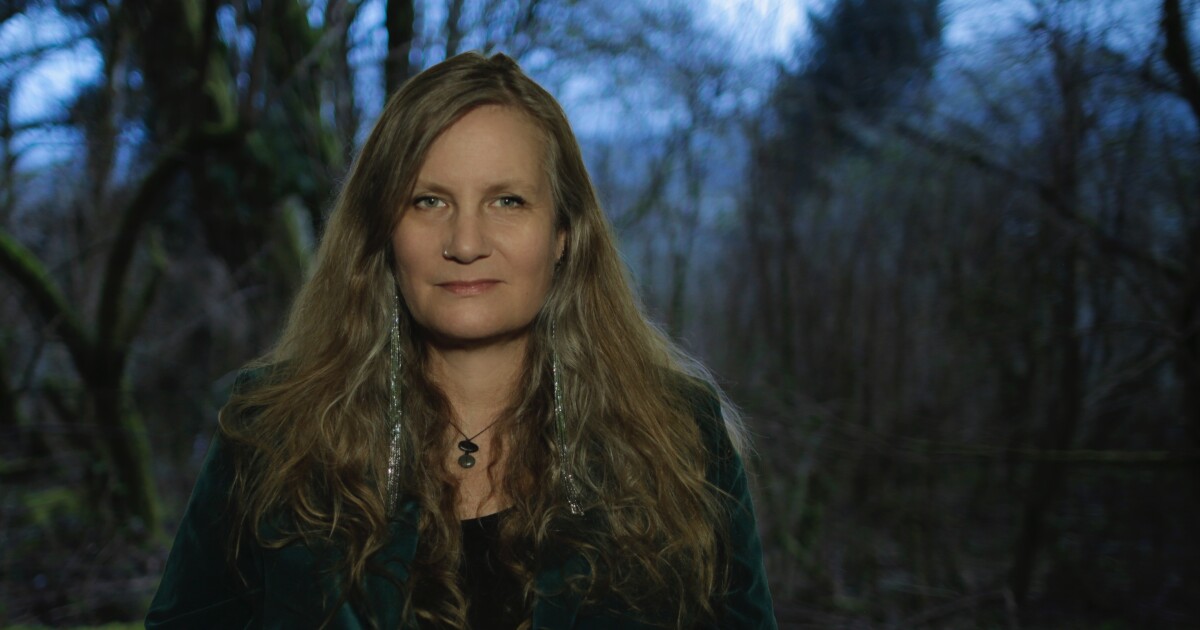 In the novel “Thrust” by Lidia Yuknavitch, a myriad of species at different points in time conceives an ocean of characters. The multiple viewpoints, ranging from a girl named Laisvė who can time travel to laborers and immigrants who worked on assembling the Statue of Liberty, stem from Yuknavich’s curiosity “into what is possible with the polyphonic voice,” she says, “Because I am deeply indifferent and appalled by the universal subject that follows the journey of a singular hero who imitates or mirrors the patriarchal order.

Released June 28, it’s a book that uses history and America as a starting point to dissolve borders and borders, as Laisvė journeys from the wreckage of a city overrun by a police state into a future close, using objects as a way to carry her through two centuries and converse with animals along the way. “Whether or not I’m successful, I’m actually trying to describe an Americanness,” Yuknavitch says. “And I’m trying to write toward a set of global possibilities, where nations crumble and national definitions become sediment again.” In a chapter that discusses the injustices of child labor, for example, Yuknavitch writes about “the sunk cost of America’s mechanization, creating the fiction of freedom, including the shrinking bodies of women and children.” “Thrust” uncovers the illusions that America was built on and continues to perpetuate, and how those beliefs can lead to bodily harm.

The Portland, Oregon, author of six other books, including “The Book of Joan” (a reimagining of Joan of Arc) and the lyrical memoir “La chronologie de l’eau” is known for body writing, a method she teaches which is “writing by and through the body”. “push” is the culmination of everything she has written towards, a searing excoriation of power structures that also honors the resilience of those who fight back. I recently spoke with her about the origins of the book, the slippery nature of language, and why she doesn’t believe in linear time.

Reading this novel, I was struck by the amount of research you have done, from canning facts to linguistics. What was the first spark of this book?

I may have missed my calling of being some sort of researcher or librarian where you sit in a room and treat all of human history like an archaeological dig, because I love research. But when I say research, I mean I go into it with a creative mind and heart. So I have no allegiance to facts, I have allegiance to imagination. The idea for the book definitely came from the conditions of our present time. And that also came from ideas about children and young adults. And ideas about climate change. And the predicaments we find ourselves in seem so serious. They’re not in the future, it’s not something to be afraid of in the future, it’s already happened. What must change? What happened in echoing time and space? What is freedom, if it ever existed? If you break the story down into particles, anything can be part of the story.

All of your books form their own kind of universe centered around recurring themes, including bodies and water and storytelling. Aurora, one of the “Thrust” characters, says “I bring stories to life, so we can reclaim our own bodies. I’m all narrative, I’m the hole in the story, I’m the sacred story. That does repetition speak to you, as a writer?

I love and revel in the relationship between words. And so when a word alludes, or echoes, or carries the trace of another word, I will follow it. So that’s a way of talking about it, it’s just semiotics. The relationship between words interests me, even obsesses me. But another way to put it would be to say, I can’t write a poem to save my life. But I think I have a poet’s heart, and a poet’s desire to be inside language, in its rhythms and sounds. And so I think I often try to create a poetics of prose. I try to make waves and circles and patterns and rhythms.

The third thing to say would be that I think of language as I think of the ocean. Language, a bit like imagination, is not ordered. It is controlled by humans. Thus, language as a system of signs could be seen as floating and undulating and filled with all symbols, words and ideas. But then we bring in grammar and syntax and diction and meaning-making and connotation and denotation, we take the ocean of the sign system and turn it into sentences and words, meanings. But I still believe they could be shaken up and rearranged.

Freedom is at the heart of this novel, and with it, captivity. Immigrants and children forced to work, as well as violence inflicted on humans by other humans, not only by physical means, but even by the loss of language or the rigidity of language. If language can confine us, how can it also liberate us?

The thing with language is that you can rearrange it at any time. And so a concrete example is Gertrude Stein. She was showing us something about the fluidity of language. And she was also showing us something, which is a central theme of “Thrust.” Is it possible to loosen our grip on the binary organization in language, like masculine, feminine? And that can mean words breaking free and becoming more fluid again, and changing the way we talk to ourselves and describe the experience.

Words, like patriotism, have become stained. We are in a particularly difficult time where words and meanings are slipping everywhere. It is a space of crisis, but it is also a space of possibility. If we could get rid of the terms “man” and “woman” as biologically essential, and a binary that divides humans, other stories of who we are might emerge.

Much of “Thrust” has to do with breaking artificial or forced boundaries or labels that have been placed around space, time and history. It is a book that is both timeless and very present too – existing in a liminal space. What is it in the threshold that compels you to live there?

Can you tell us about the different meanings behind the title?

So there is the Statue of Liberty, her arm. It’s a version of a kind of push. And it’s not phallic. It’s not a penis. Then there is a sexual connotation that we have usually or in the past associated with masculinity or men, which is the coarse thrusting motion of fellow centrism. And I wanted to give that back to the hips of women and queer people and non-gender binary people as a way to push desire endlessly into the world and each other. It’s about, you know, the hips of a woman in labor or the hips of two gay women coming together so differently than heterosexual intercourse, or desire and empowerment and imagination, never stopping ever, always pushing forward or backward or wherever. Imagination springs up in children. The symbolic surges I’ve been trying to see in this novel are about relational energies transferring between people and releasing and calming and releasing in waves.