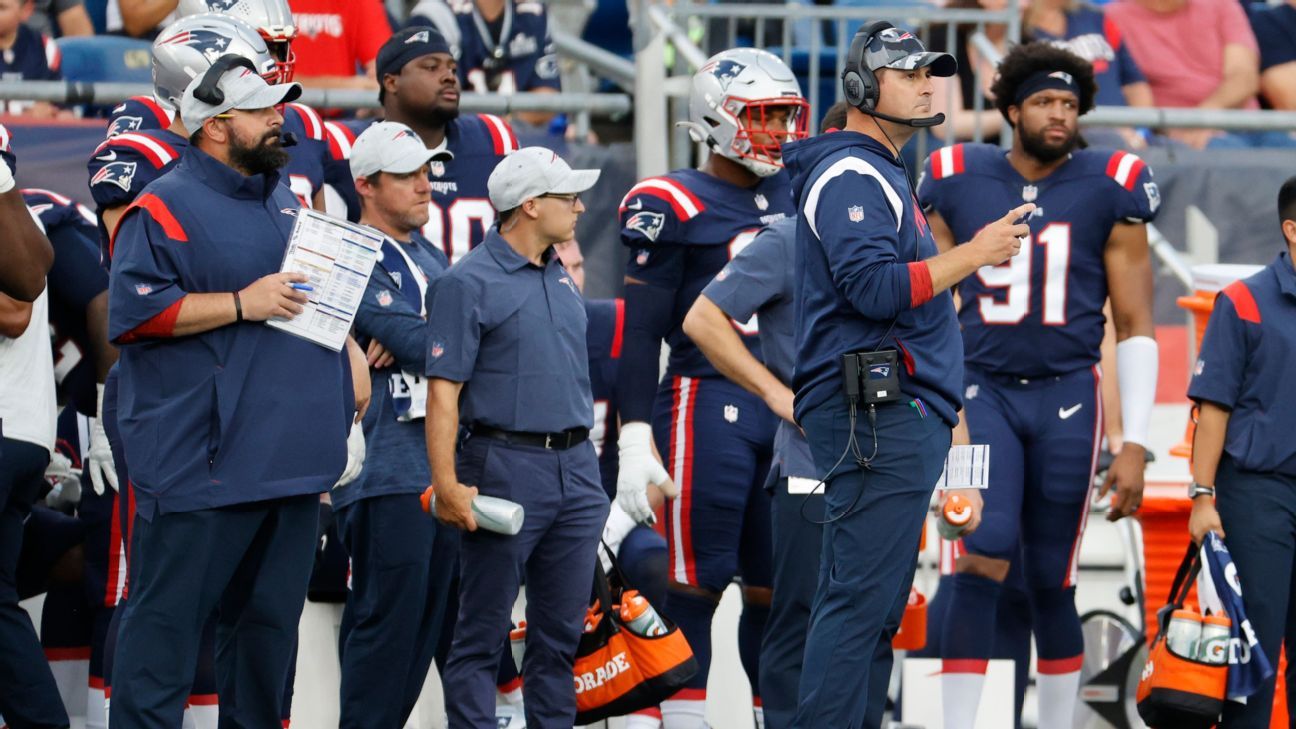 FOXBOROUGH, Mass. – Thoughts and quick notes on the New England Patriots and the NFL:

1. White’s analysis: Retired Patriots running back James White is considering getting into sports media in his post-game career, and he’s already exploring his options.

“It feels natural. I’m used to speaking in front of people, and I think that would be the smoothest transition for me,” he said. “Doing a job where football is still part of it would be really cool because the game has been a part of my life for 25 years.”

White was a guest analyst for part of the Patriots’ preseason game against the Panthers on Friday night, which he said was an “awesome” experience. As for his analysis of the current Patriots roster, White shared his thoughts with ESPN.com.

On the hot topic of assistants Matt Patricia and Joe Judge leading the offense despite their lack of experience, White doesn’t see that holding the team back.

“I have a lot of faith in him because a lot of coaches, especially here, have coached on the defensive side, on the attacking side, they coach different positions. I think that’s the beautiful thing about coaching. here – you’re going to learn the game from every angle,” he said.

“And Matt Patricia and Joe Judge, they’ve seen a lot of football from different perspectives. I think it’s going to be fine. They’re learning. It’s a learning curve for everyone.”

• A preview of KC’s attack
• Keep Rhule out of the harness
• The Packers’ RBs as pass receivers?
• Will the best WRs of the new teams take place?
• Bears QB Fields set to succeed in Year 2

White notices changes to the Patriots’ approach (eg, more fullback), though he expects the finished product to look mostly like the fans.

“Every time you have a new offensive coordinator coming in, you’re going to have things that are the same, things that are different. You have to see what works,” he said.

“I always think week to week they’ll have a different approach depending on the teams they’re up against. I think these guys are doing a great job of designing games and putting players in a position to succeed. .”

White acknowledged that the change from Josh McDaniels to Patricia and Judge is still important and said he sees the Patriots going through a process in which players and coaches work to gain more comfort with each other. “That’s what pre-season is for – to eliminate those flaws,” he said.

Of the Patriots’ offensive personnel, whom he called talented in all areas, White said he considers the receiving corps to be extremely underappreciated.

2. Las Vegas Heat: The Patriots will spend this week in Las Vegas. They’re scheduled to get there on Sunday, practice as a team on Monday, then hold joint workouts with the Raiders on Tuesday and Wednesday before Friday’s preseason finale. Forecasts call for highs of 103, 105 and 102 to start the week, which could help as the team looks to its regular season opener in Miami.

3. Wristbands for QB: Patriots quarterbacks wear wristbands that include play calls during practices and preseason games, which is new and reflects the significant level of change with the offensive system. So when Patricia or the judge calls a play by its number, the quarterbacks then look at that number’s wristband and then relay the play to the huddle. That’s part of what led to a communication breakdown in the preseason opener when Brian Hoyer burned a timeout.

Choose your league size, customize the score and set the rules you want to follow in order to create the fantasy football league you wanna play.

Create your custom league for free!

4. Third backward attempt: One thing that caught White’s attention during Friday’s preseason game was the fact that the Patriots didn’t have a specific player to fill his “comeback” role. The team left Damien Harris, Rhamondre Stevenson and Ty Montgomery on the field in third position on each of the drives they were on the field, which could be a preview of what’s to come in the regular season. “I think it’s cool, these guys getting involved in the game and getting used to staying out for the three tries,” he said. “I think these guys are all extremely talented and can play on all three tries.”

5. Massachusetts Whites: James and Diana White plan to make Massachusetts their permanent home after James retires from football. They had considered Chicago, but staying close to the doctors who helped their son, Xzavier, with food allergies was one of the factors that made them stay. “It’s a special place for us. We have a lot of memories and have been able to meet and connect with a lot of great people here,” said James White.

6. Mills’ Motto: When the Patriots defense comes together before a practice, safety Adrian Phillips said starting cornerback Jalen Mills usually has the same message to the unit: “Championship defense. Championship mindset.” Mills said it was his way of conveying the mentality he believed the Patriots should have, and he backed it up with a strong training camp. For Phillips, it’s a reflection of Mills’ confidence and desire “to take the next step and be the guy” in filling the void left by JC Jackson’s free agent departure.

7. McCourty’s insight: Patriots captain Devin McCourty’s insight into rookie cornerbacks Jack Jones (fourth-round, Arizona State) and Marcus Jones (third-round, Houston) promises the team that both can become key high school fixtures. McCourty said Jack Jones’ “football instinct” stood out for him, while noting he had “big feet”. McCourty also recounted that Marcus Jones sits next to him in meetings, and his thirst for learning shows in how he already appears in several roles, such as cornerback and an inside security role. “We have a really good group of rookies,” McCourty said.

8. Schooler-Ebner Liaison: When former Patriots special team member Nate Ebner (2012-2019) went to practice last week, players noted that rookie Brenden Schooler (Texas) made sure to show up personally. Schooler’s special teams prowess has helped him become a leading candidate to extend the Patriots’ 18-season undrafted free agent streak on the original 53-player roster, and players are seeing a bit of Ebner in his game.

9. Impact of Thornton’s injury. Patriots rookie receiver Tyquan Thornton was eliminated from Friday night’s game with a shoulder and collarbone injury and is expected to be sidelined for at least the first month of the regular season. The likely scenario therefore seems to be that he will be on the initial 53-man roster before being transferred to the IR at short notice. That could open the door for Lil’Jordan Humphrey, the team’s top receiver in the preseason (11-133-1), to stay on the roster.